A journey through societal mythology. 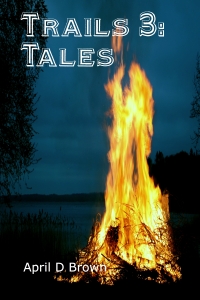 “Trails Through the Tales” is set a few hundred years later. Zella and Tanna, mother and daughter, must save their people, while choosing what to keep, and what to let go of in the religion that has developed among their people.

“Trails Through the Tales” is a futuristic look at North America. The flora, fauna, and geography have changed to be unrecognizable to current dwellers. The people in this time mine our garbage pits for their use. What do they find useful? What ís left of our world in their world? (The idea for this story was begun before “Life After People” aired.)

Premise for “Trails Through the Tales” : As this story took shape, it did not leave me much room to allow the characters to discover what was in the garbage pits. Many people, unlike me, would find a record of discoveries boring. So, I brought other conflicts into the scene. What do people actually find in landfills? Just about everything in our society. We live under the assumption, that once we bury it in the ground, it goes away.

If we think about the garbage pits, we know that. If it all went away, we wouldn’t have the study of archeology.

What we know, is that if items are on top of the ground, or just below the surface, wind, rain, and animals will deteriorate them. Yes, they go back into the earth.

However, in landfills, they do not. After a few feet of garbage, or dirt piled on top, animals can no longer reach them, and bacteria goes dormant, until they are pulled forth from the earth yet again. So, anything you give to the garbage man today, can be found (with your fingerprints on it) hundreds of years from now. Yes, buried books and newsprint can be perfectly legible, if smudged. If you question this, check out the book: “Rubbish,” by William Rathje founder of “The Garbage Project,” in 1973. You are welcome to study Garbology.

What happens after “Trails Through the Tales”:

Many in the communities continue to live apart as adults, yet the younger generation is more open to choosing to live together.

Zella chooses to live with Dover at the new Shells village. She is happy in her tiny hut, away from prying eyes, yet close enough to the village to hear everything that goes on. She really doesnít miss the long summer walks to and from her home. Something about going home every night steadies her. She is still close to Jorn, and realizes why she had found him so attractive, since he wasn’t really her brother.

Jorn steps down from leadership of the Lava villa. He feels guilt over allowing Blake to go beyond what was acceptable to the community. He also realizes that he was the only one who knew he was adopted, because he had been an unwanted child. Never knowing his true mother, he felt he could be anyone. Yet, he knew he wasn’t fit to lead his villa any longer.

Tanna takes over leadership from Jorn. She chooses to settle with Robin in Shells villa. They keep the horses to run errands, knowledge, and information back and forth. Robin leads in her absence. Some days, she wishes for the instant communication of her ancestors. Yet, she knows what that instant information can entail. Her joy is riding into a villaís camp – and seeing the hope, fear, and excitement in the eyes of the onlookers, waiting for whatever news she brings. Instant communication would destroy that. There would be no more hope, or fear, as everyone would know anything instantly. She hoped her mother, and Rusty would never find what they were looking for.

Rusty stayed with Tanna a few years, then went to live with Zella, her brother, and Corandra. She, like Zella, hoped to find something to connect her better with the ancestors. If they find it, how will it change their community?

With each step, they must decide how much technology is okay, and how it is perceived. As each generation of interveners lives and dies, eventually, the day will come when only one is left. Will Earth’s population have learned their lesson, or will they revert again?

Author’s Note: This is by far the most violent novel I have published to date. I had no intention of it becoming so violent. In fact, it was supposed to be a simple boring tale. Trails Through the Tales turned into the nightmare of the ancestor’s battles awakening in their own community as little troubles went unnoticed, and unacknowledged, for two generations.

Amber’s descendants, Tanna and her mother, Zella, are garbage miners who each end up embroiled in their own fight for survival when one of the villas they trade with regularly begins acting strangely. Blake, the Webbel leader, has cut off access to the area west of the mines, and only allows digging to occur two weeks of the year. Roamers he has taken in are abusing women from unknown villas, locking them in pits. Zella has to try to heal the mental anguish of those who suffered at the hands and words of Blake. As a spiritual leader, she thought she wanted her daughter to assume leadership responsibilities at Spring Trade. Not this way, though.

Tanna would rather be a traveler, and a wanderer, to see villas she never dreamed of instead of assuming her mother’s leadership role. Instead, after rescuing Rusty and her younger brother Henry, she fights to save those in the villas who have not gone to the spring trade meeting. During the battle to save the villa, she is faced with her fear of a man her own age, Orid, whose intentions prove deadly for the women who remained at the winter villages.  In the battles, she fights to maintain the safety she has always know for future generations, while avoiding a return the ancestor’s battle ridden past.

Where to find me:

Trails Through the Myths (Google Plus)

Sign up for my Newsletter and be notified when, and where each novel, novella, and short story will be published!

One Stop for Writers